JQ American Corp. Recognized as a Finalist in the National District Export 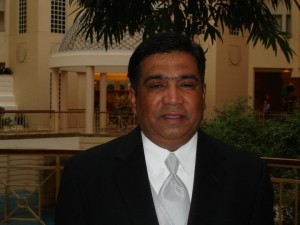 JQ America Corp. is breaking into the big leagues.
The small Hayward exporter just scored a $22.3 million contract to outfit a hospital in Bhopal, India, with syringes, scalpels and other supplies.
The three-year contract, which begins in 2007, raises both the firm’s revenue and profile, potentially setting the stage for large future projects.

“To get a contract of this size gives us good credentials. It will be a great boost for us,” said CEO Jamal
Qureshi, who founded the company with his wife Akila Attarwala in their Fremont apartment eight years ago.
Since that first year in business, when the couple made $935, Qureshi has slowly grown his enterprise. He broadened his initial focus from exporting American-made industrial supplies, like valves and bearings, to oil companies in the Middle East and Africa.

Now he exports hospital equipment and medical disposables to India and Central Asia and has done work in 16 markets, including Israel, Saudi Arabia and Russia.
JQ America, which employs nine, also has an office in Algeria.
“It’s a one-person office to serve oil and gas clients in North Africa,” said Rod Hirsch, director of the Oakland Export Assistance Center, a division of the U.S. Department of Commerce that helps local companies export America-made goods. Along with helping Qureshi establish the Algerian outpost, Hirsch’s office also helped JQ America secure the hospital deal with the Bhopal Medical Trust.

With just $1.7 million in revenue last year, Qureshi’s firm was not large enough to get a line of credit from a private sector bank to purchase the $20 million of medical supplies. So, Hirsch connected the company with the Export-Import Bank of the United States — an export credit agency designed to increase the export of U.S. goods and help maintain American jobs.
The 70-year-old bank assumes credit and country risks the private sector is unwilling or unable to accept in the form of working capital guarantees (pre-export financing), export credit insurance, loan guarantees and direct loans (buyer financing).

Said Hirsch of his role: “I’m the matchmaker.”
Of the $22.3 million Bhopal contract, $2.3 million represents revenue to JQ America and will berecognized over the next three years, according to Qureshi.
The new 750-bed hospital is supported by the Bhopal Medical Trust — a nonprofit devoted to helping victims still suffering from the Union Carbide disaster of 1984, in which highly toxic gas leaked and killed thousands.

The Trust has opened one hospital and five community clinics to date. A total of 10 are planned.
Trust Chairman Pradeep Dixit indicated support from the U.S. Department of Commerce as well as his introduction to Qureshi via a mutual Indian friend played a role in his decision to award the contract to JQ America.

The high level and consistent quality of U.S. medical supplies was the main factor, however.
“Based on our survey with other countries we found that the U.S. quality and subsequent services are the best,” he said in an email.
A signing ceremony is slated for later this month with the U.S. undersecretary of commerce in Bhopal.
Lizette Wilson covers small business for the San Francisco Business Times.

Not many people think of oil and gas equipment exports as a home business. But when Jamal Qureshi started JQ American Corp. in 1998, he and his wife, Akila, ran the export business from their house.Read More...

JQ-American Corp. Recognized as a Finalist in the National District Export

200,000 and Counting – Distributor’s Product Line Means More Exports Hayward, CA – Oct 27, 2004 (PRN): It may not be the familiar “shop till you drop,” but for JQ American Corporation’s worldwide customers, Read More...